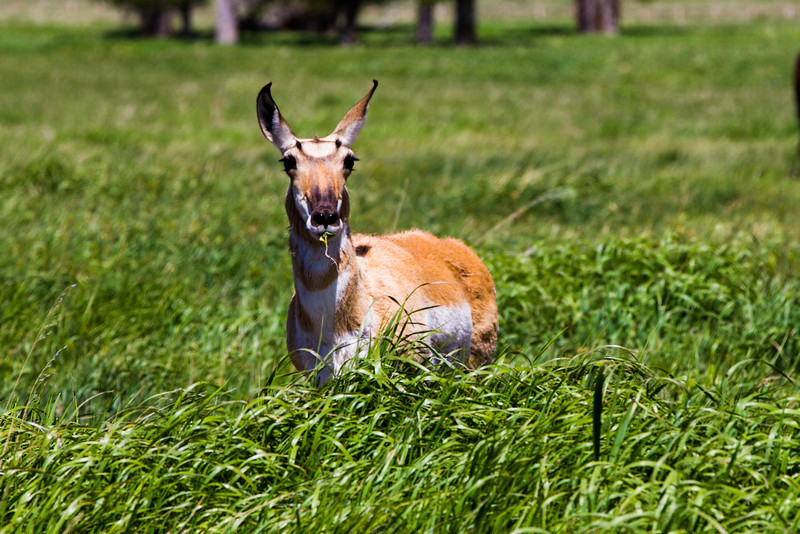 Pronghorn, due to their unique biology, don’t generally jump fences like elk or deer. They crawl under them. Pronghorn evolved in the Pleistocene when they were prey for speedy cheetahs and hyenas. Thus the pronghorn’s current status as the fastest land animal in North America is, in the words of pronghorn researcher John A. Byers, a “ghost of (these) predators past.” With an ability to run at 30 mph indefinitely with top speeds pushing 60 mph, they simply outran everything.

So as populous as pronghorn appear in many places in the west, they are strangely ill-adapted to the modern world where private lands, and many public lands, are fragmented by fences and development. These “new threats” not only restrict their greatest asset to escape predators but also their ability to migrate over long distances required to find adequate snow-free habitat and forage.

Our national parks are integral parts of a larger landscape and are deeply connected and vital to the health of surrounding wild lands and gateway communities. In the Greater Yellowstone ecosystem, Yellowstone National Park’s 2.2 million acres serve as the core for a diversity of wildlife species that spend part of the year inside the park. As wildlife move from one place to another they do not distinguish between state, federal and private land; they go where there is habitat. Conserving pronghorn migration on public and private lands outside of the Yellowstone National Park offers the last best hope for this iconic species.
On the Ground Solutions